Smith Creek is one of three showcase watersheds designated by USDA as a showcase watershed (Virginia, Maryland, and Pennsylvania) launched in 2010 to demonstrate what can be achieved by combining strong partnerships, sound science and funding to solve natural resource problems in targeted areas. Richard Fitzgerald served as coordinator of the conservation activities of the watershed partnership.

While working at NRCS, collaborated with federal and state partners as well as local conservation districts, watershed groups and non-profits to provide technical and financial assistance to landowners to reduce nitrogen and phosphorus runoff into Smith Creek and its tributaries.

In the 18 months since Smith Creek was designated one of three USDA “showcase watersheds” within the larger Chesapeake Bay watershed, extra money and attention focused on farm conservation in the area has significantly increased participation in federal cost-share programs. 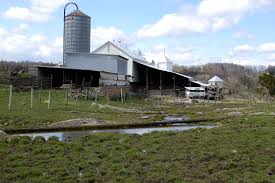 I have been involved with soil nitrate testing since initial field studies were done by Va. Tech in the mid-90’s to develop recommendations for adjustments to nitrogen rates for corn. Most Mid-Atlantic states have developed thresholds for the in-season tests like the PSNT. Each state also documents the requirements to evaluate manure history, cropping system, field productivity and weather conditions when adjusting nitrogen recommendations. Using the nutrient management plan, the PSNT can be the best tool we have for making in-season adjustments to nitrogen rates. Recent  yield trials have reaffirmed that, while not perfect, this tool can help a farmer realize optimum corn yields while saving $20 per acre of nitrogen.

Richard Fitzgerald as Equity Ag, can provide agronomic services ranging from a varied number of resource and nutrient management practices. Here are several examples of farms, projects and demonstrations Richard Fitzgerald has worked on.

Kyle Leonard's Colebelle Dairy in Spotswood has injected dairy slurry for two years as a part of a Conservation Innovation Grant (CIG) sponsored through NRCS and administered by the Virginia No-Till Alliance. The Shenandoah Valley of Virginia has not been viewed by farmers as a place where injection of dairy slurry can be achieved with its steep slopes, rocky soils and distance from the manure pit. Even though research trials confirm that reducing ammonia loss can double the available nitrogen for plant uptake from direct injection, this return cannot cover the increased total costs. Investing in properly-sized equipment, application efficiencies comparable to broadcasting can be achieved. While our replicated yield plots have not produced statistical yield increases, Kyle Leonard admits, his "corn is more uniform down a thousand feet of row." His goal is to reduce nitrogen application later in the growing season and use this savings to offset the increases capital costs of the injection equiptment. He believes injection of dairy slurry will recover more nutrients, better utlize his manure and produce higher yields of intensively managed corn.

I have conducted field trials that have not indicated statistical yield increases but have produced high yields with injected slurry rates and small starter rates of banded nitrogen. Replacing fertilizer costs and application costs from elsewhere in the cropping system can offset increased capital and operating expenses. I can work with dairies large and small to benefit from slurry injection by balancing on-farm nutrients and reducing fertilizer purchases.

American Farmland Trust:  “Soil Health for Wallet Wealth” is a two year (CIG) Conservation Innovation Grant with NRCS, AFT and Dr. Wade Thomason at Virginia Cooperative Extension. Five farmers have planted multi-species cover crops where testing will be conducted to quantify soil microbial populations and changes using RNA sequencing. The subsequent corn crop will be monitored throughout the growing season using in-season testing. Replicated treatments of 0-50-100 pounds of nitrogen will be applied at side-dress and followed through to yield. Can we find early indicators of improved soil health indicators, estimate the nitrogen contribution from mixed species cover crops and document a yield influence from this practice? I am working as a private consultant hired to assist farmers with plot implementation in this project.